I was once the guy who held onto a property until I no longer could, until foreclosure was inevitable. Not only was this extremely stressful and anxiety-filled, it also cost me my credit rating. At the time, I had no idea how important my credit and my peace of mind were, so I allowed myself to be taken down, financially and emotionally, with the house. I later acquired a mentor who advised me to remember that things happen, and as long as you are giving up something you can later regain, then it’s best to cut your losses while you are ahead and keep moving. “Ahead” to me meant before being financially ruined. He left me with this quote, which would stick with me for life: “As long as you never fall in love with anything that is materially based and also financially draining, then you will always have money or be able to quickly get to the point of regaining your finances.”

Another life experience that led me to the real estate investment journey was watching a close friend and his siblings hang onto a house that was left to them, but it became too much to bear once they factored in fees, taxes, insurance, maintenance and repairs, market decline, non-paying tenants, and home Improvement costs. Not only did they take too long to realize what they were really up against, they’d also allowed the property to decline as they tried to reach an agreement to share the upkeep costs. The house declined, the market declined, a squatting tenant refused to leave, and when they decided to sell, they went through a realtor, which added significant fees to the transaction. The process was very lengthy and painful for individuals who were already at their wits’ end. The buyer was financing through a bank, which slowed the process even more, and the bank demanded repairs in order to bring the property up to code, which the sellers could ill afford. The closing date changed multiple times because of this. They went back and forth with inspectors who appeared to be determined to keep them from closing. The bank poked holes in the buyer’s finances and credit, prolonging the process after initially approving the loan. In short, it was a four- to five-month nightmare.

These are only two of many similar situations that switched on the light bulb in my head. This is when I decided that as soon as I was armed with the right knowledge and finances, I would become a part of the solution to these kinds of problems.

I started off individually, then later decided to incorporate, which brings you Middle Ground Properties, derived from the saying “Let’s find a middle ground we can both deem reasonable.” 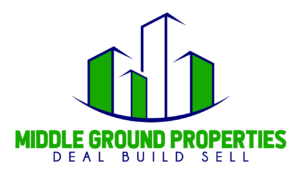